Famous Roofs: All About the Taj Mahal 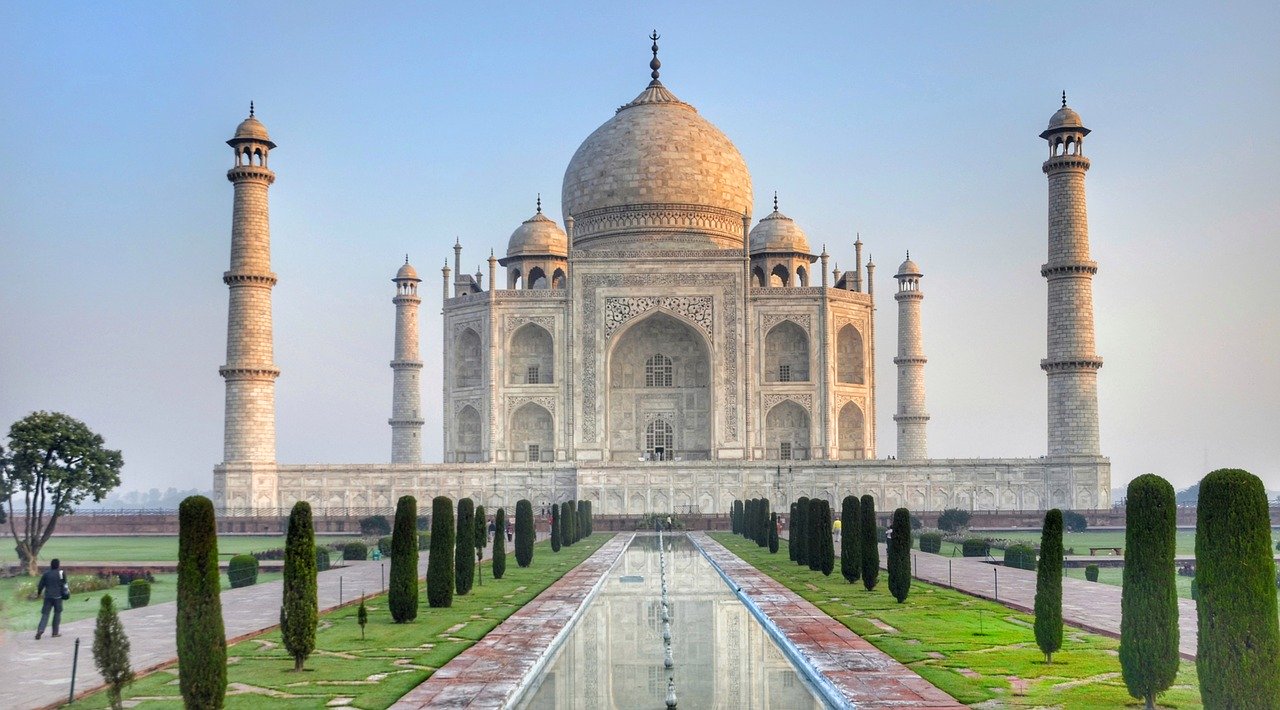 Mughal Emperor Shah Jahan commissioned the Taj Mahal in 1632 as a mausoleum for his beloved wife. It took 20 years to build the Taj Mahal, and it was built in Agra, India, on the southern bank of the Yamuna River. This expansive complex is a beautiful example of Mughal architecture. Built with white marble, the Taj Mahal stands in the center of the complex. The Taj Mahal was designated as a UNESCO World Heritage site in 1983, and it is considered to be a symbol of India’s history.

Shah Jahan belonged to the Mughal dynasty, which was the ruling family of northern India from the 16th century to the middle of the 18th century. Shah Jahan battled with his brothers to become the emperor after the death of their father in 1627. In 1628, Shah Jahan was officially crowned emperor. He had three queens, but his favorite was Mumtaz Mahal. They married in 1612. Unfortunately, Mumtaz Mahal died in 1631 after giving birth to their 14th child. Shah Jahan grieved the loss of his wife, and he commissioned the creation of a mausoleum for her on the other side of the Yamuna River from his palace. Work began on the Taj Mahal in 1632, and it took 20 years to build it. Ustad Ahmad Lahouri is believed to have been the chief architect of the Taj Mahal, and more than 20,000 workers and about 1,000 elephants were on the labor team.

Architecture of the Taj Mahal

The Taj Mahal was named to honor Mumtaz Mahal. The building is made of white marble, which is inlaid with amethyst, crystal, jade, lapis lazuli, and turquoise placed to create intricate designs. The central dome is 240 feet high, and it is surrounded by four smaller domes and four towers in the corners. Verses from the Koran are inscribed on the arched entrances. Inside, a marble octagonal chamber is decorated with carvings and inlaid with semiprecious stones, serving as the false tomb of Mumtaz Mahal. The sarcophagus that actually contains her remains is below the chamber at one end of the garden. The full Taj Mahal complex features a red sandstone gateway and a garden with long pools of water that divide it into four separate parts. Across from the red sandstone mosque sits a building called a jawab, erected to balance out the symmetry of the complex.

The Roof of the Taj Mahal

The roof of the Taj Mahal is often high on the list of the world’s most famous roofs. The domed roof of the center octagonal chamber has a lotus design and pattern painted and molded into it. The four surrounding domes are similar in shape and color but are smaller. A gilded finial in the shape of a crescent moon sits at the top of the center dome of the roof.

The Gardens of the Taj Mahal

The gardens of the Taj Mahal are designed geometrically based on the number four and multiples of four. The number four is considered to be Islam’s holiest number. The four garden parts in the Taj Mahal complex are divided by two marble canals in the center. Each quarter garden has 16 flower beds that are also divided by stone paths. Each flower bed is said to contain 400 plants. Trees in the garden are cypress trees that symbolize death and fruit trees that symbolize life. The trees are planted symmetrically.

What the Taj Mahal Represents

Because Shah Jahan commissioned the creation of the Taj Mahal for his deceased wife, it’s always been a symbol of love and devotion. The painstaking building process that spanned 20 years shows the attention to detail and Shah Jahan’s desire that the building be nothing short of perfect. The Taj Mahal also symbolizes power. Shah Jahan was an ambitious emperor who was intent on asserting his position within his kingdom and beyond. The Taj Mahal symbolizes a divine throne and God’s judgment as well as a representation of paradise.

Current Issues With the Taj Mahal

One of the biggest threats to the Taj Mahal today is pollution. The white marble is showing signs of deterioration and discoloration due to pollution and acid rain. The Indian government has created a special Taj Trapezium Zone surrounding the Taj Mahal, restricting coal-burning industries operating in this zone and requiring these companies to regulate their emissions. The Yamuna River that flows near the Taj Mahal complex has also been drying up due to upstream damming. This may be contributing to cracks appearing in the marble platform, which may be causing instability.

The Taj Mahal continues to attract millions of visitors each year who want to experience the beauty and architecture of the complex. Indian authorities strive to protect this centuries-old landmark as a point of national pride as well as a draw for tourists.